Let the battles begin in Play’n GO’s action-packed video slot Game of Gladiators! This 5-reel video slot is sure to have players battling their way to wealth and glory, with several mystery features to add to the excitement!
The aim of the game is to be the last Gladiator standing in the Great Arena by winning the slot’s battle feature Enter the Arena.
The slot’s beautifully rendered art and full reel character symbols make this game a visual spectacle, with authentic details and aesthetic.
Players must match 3, 4 or 5 symbols across 20 paylines to pick up a standard win in the base game. The Wild Tiger symbol will substitute for any other symbol, excluding Scatters, to help create winning combinations. 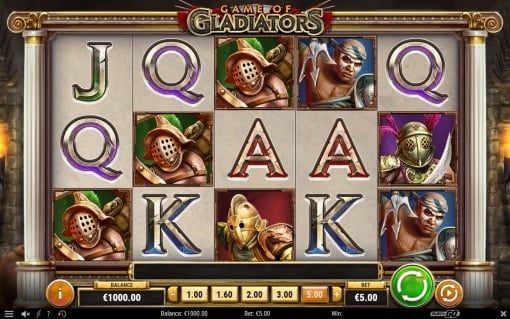 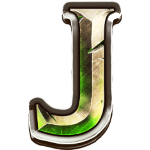 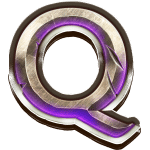 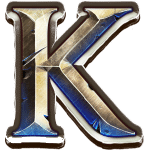 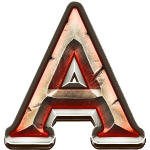 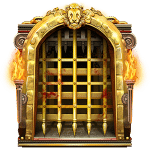 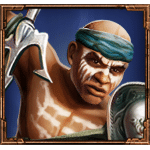 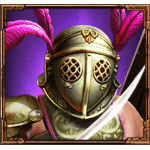 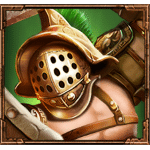 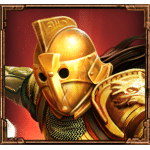 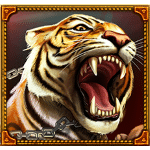 The game has several Primus Attack special features to keep players engaged and help them to trigger more wins. These can be randomly triggered, and some are triggered before a reel result and some after.

Triggered before the spin result. All gladiator symbols of one kind are held, then you are awarded a single re-spin. 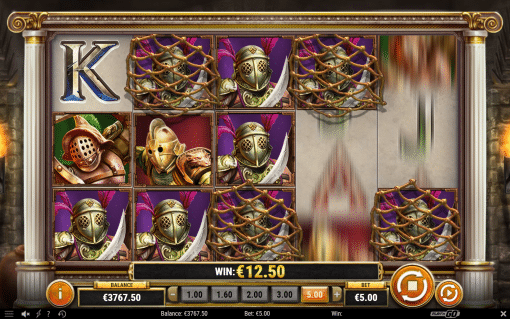 The Tiger Wild becomes enraged,
and two full reels of Tiger Wilds are added to the reels. 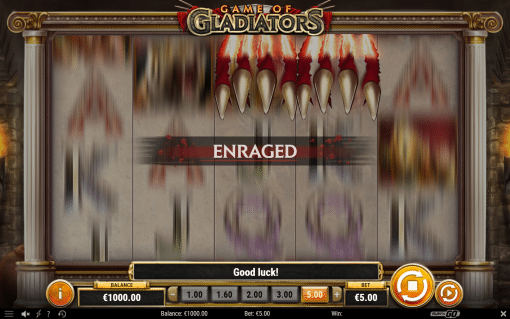 Triggered before reels stopping. The first reel is duplicated on the 2nd and 3rd reels, with the possibility of duplication on 4th and 5th reels also. Mega HP symbol can land on the first reel and be duplicated. 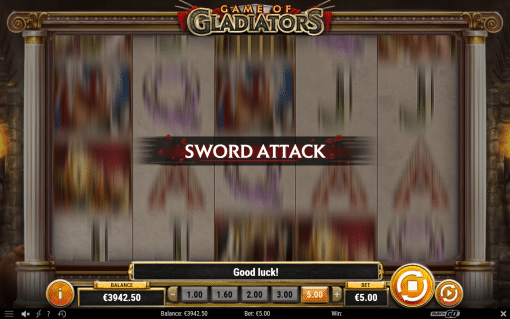 Triggered before the spin result. A Gladiator is chosen to become famous. After reel spin, all famous symbols are added up and paid out using the battle paytable, and normal pay line wins are also awarded. 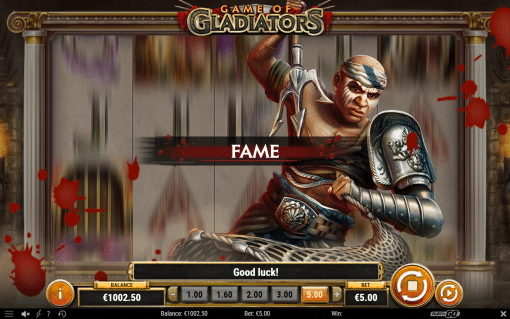 Triggered before the spin result. 3-6 spears are thrown at the spinning reels, all spear hits become WILD and stick to the reels. 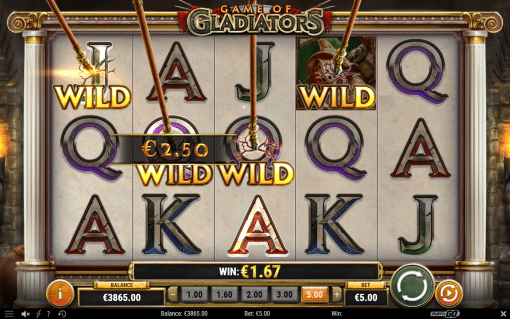 You need to hit 3 Scatters on reels 1, 3 or 5, then this will trigger Enter the Arena feature. Once triggered you must select one of two gladiators’ symbols, Amazonia or Spartacus, to be your champion. This champion will now become the Scatter for the duration of the feature.

Each Scatter that lands on the reel will mount one attack on a group of premium symbols, destroying that group, if two Scatter land two groups will be attacked and 3 Scatters will attack three groups. If 2 or 3 Scatters land, then the Battle Prize will be multiplied by 2x and 3x respectively.

The battle is won once all groups have been destroyed or will be lost if the groups fill the Battle Meter.
Each time a Scatter and premium symbols land on the reels the premium symbols will be added to the Meter.
Free Spins are unlimited until the Battle is over!

Each champion has a different Victory Prize if they win their battle.
Amazonia will award a bonus wage multiplier of between 20x to 100x and
Spartacus will re-trigger the Enter the Arena feature (this can only be re-triggered once).
All Victory Prizes are added to any prizes won during the feature. 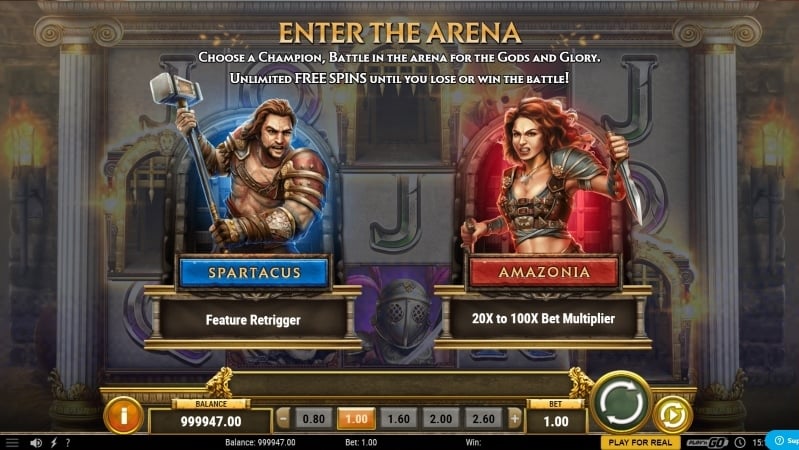 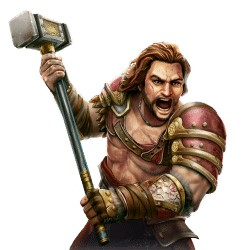 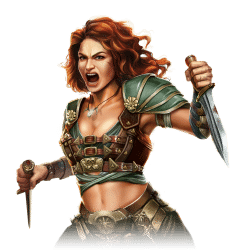 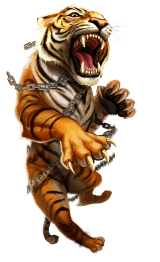 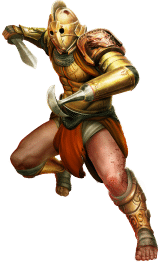 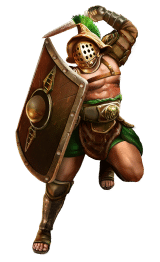 Game of Gladiators is mostly a wagering game with a regular setup giving 96.42% RTP.
The bonuses are mostly average and at least during the test play, I failed to see any great win potential on this slot. 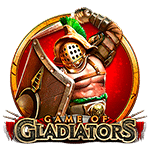 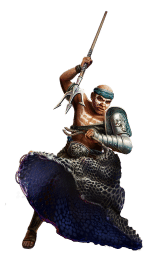 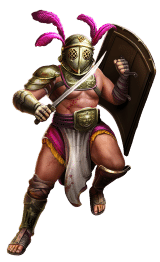 For every game reviewed at Jarttu84.com, we are doing an independent test of the slot, to give you the exact numbers, and honest opinion about the game, it’s features, volatility, and the payouts.

All the results are based on a 1000-2000spin test run and the results will vary depending on your luck.

Remember that every game has under 100% RTP. So, the game will always win in the long run.

Game of Gladiators gives a lot of bonuses, but I can just not see how you’re going to get the big win here.
If you like to play a longtime with your money then this is the right game for you.
However, if you hope you will hit a big win in one spin, this is not the game for you.
Personally, I think nobody will play/remember this game after 6 months.
The fact that you can only get 1 retrigger in the bonus makes the potential way lower.

Feel free to try-out the Game of Gladiators slot yourself as a demo mode, or, check the casinos below where you can play it for real.

Caxino is a new Casino from Rootz the creators of the Wildz casino!
All the Best slots from the top providers, for example,
Quickspin, NetEnt, Play’n Go, Elk Studios, Push Gaming, Gamomat, Big Time Gaming, Red Rake, and Thunderkick.
Evolution Gaming & Netent Live Casino games
and tons of table games are also on the site.
Join now and experience the best new casino from 2020 yourself!

Winfest offers nearly, 600 different games from the most renowned game developers. Variety of jackpot games, table games and, a Live casino for your pure gambling pleasure!